Ahhhh! There is no other way of describing it. Thats why we’d like to share the love with you. Thanks to everybody who came to see us. See you next time around!

It’s been a loooong time since last we visited the fine country of Germany. But Tomorrow we’ll be back for two gigs. Check out the concert section for detail. We’re looking forward to it like small kids!

There will also be a very special treat for our German audience. There will be a world premiere of our next video on the Pop 10 channel sometime Friday night. We’ll make sure to tweet about it. I guess it’s time to remind you of our last visit in that studio. Look at how young we were! ahhhh, those were the days…

A while back, when I cleaned out of my beloved Renault 5 TL before I sold it, I found an interesting artifact. It was a frizzy piece of paper hidden in a corner of the trunk. And what do you know? It is the setlist from the first gig The Vineyards did! What a relic!

The paper is not dated, so you may ask how can I know it is the first setlist? There is one song called After the Great Divide that we have only played once, and that was on the very first gig at Barbeint in Oslo 10th April 2003. The song was actually a slow waltz. Nice enough, but it just didn´t cut it. And it still doesn´t.

Those of you that have followed us through the years might see that three of the songs found their way to official album releases. Most of the other songs unfortunately did not, but are out there as demo recordings. So if you went to one of our early shows, maybe you got your hand on some golden treasure?

The final trivia regarding the lost but now found setlist is that it is actually written by Hans Martin. This is very rare, and happened only in 2003.

Then the first gig this autumn is done! We opened a two day festival located north-east in Oslo in the suburban heaven called Groruddalen. We had some difficulties getting the correct information regarding when we were to show up, and for how long we were supposed to play. So, we arrived one hour before we thought we were supposed to be there, and one hour after the festival thougt they had told us to be there. Anyhow, we got there and started to do what every rock orchestra does most of the time when giging – yes,  we wait.

It is a very strange unwritten rule that now matter how early or late you arrive, you just have to wait. So, over the years we have become quite good at it as well.

We were the opening act this evening, and the bands playing after us were Satyricon and Kaizer´s Orchestra. For some reason the Kaizer-people had a stupid amount of flight cases that just had to be placed right at the entrance of the stage, and the whole «where should we put our gear» was a bit confusing. But in the end we found a decent spot on the stage. I placed my monstrous bass rig right in front of Frost´s evil drum kit – just to make a childish statement, as I often do.

The ancient VNRDS-organ was brought along for this special occasion. However, it chose to just not work. Too bad, but we had the Phillichorda so the delightful organ sound was secured. Hans Martin was in addition in bewilderment regarding our infamous backdrop.

For some reason there seemed to be some difficulties for the stage crew to actually hang the backdrop behind us. Even after a friendly discussion about the pros and cons of backdrop engineering, the prospects looked bleak. But 30 minutes later, two lads from the stage crew found out that they could climb the stage rig, and a few meters of gaffa later:

To be honest, the gig went OK. We have to admit that we are a bit rusty, but the audience seemed happy, so no reason to complain. The strange thing was that we were told to play for 35 minutes. But because of a general high speed song delivery we played for about 30 minutes. When we went of stage someone backstage said: «What?! You were supposed to play for an hour!». Nobody had told us, but we went back on and played some more merry tunes. All in all, great fun!

Did you think that The Vineyards didn´t have any plans this autumn? That they were just going to stay indoors playing mighty rock music for their own amusement? You couldn´t be more wrong!

As mentioned before we are doing a mini tour with The Audience in early November. An update here is that the venue in Oslo is Garage, and yet another band will join us for the evening: X-Queen of the Astronauts. Oh yes, you´ve heard them before, and you love them too.

But there is more to come!

Already on 4th September we are playing festival called Granittrock, along with Satyricon and Kaizers Orchestra. That should be fun.

23rd and 24th October we are transporting our tiny asses to Berlin. The gig on the 23rd is not yet confrimed. The gig on the 24th is nothing less booked by the Norwegian Embassy! Can you dig it? We can. The details are a bit unclear, but we hear roumors that it is held in a circus tent.

The 30th October we are back in Norway playing a show at Gamla in Oslo. It is an event called «Bønder i byen». We played there last year, and they were so kind to ask us once again.

Then it is the mini tour with The Audience and X-Queen of the Astronauts 5th-7th November.

After a short break we are setting sails to conquer yet another country: The Netherlands. 26th-28th November we are doing another mini tour. At least one gig will be with The Audience in Den Haag. Information on the other two gigs will be revealed soon. Maybe we will team up with some old friends of ours.

So now you are almost as updated on The Vineyards as we are!

We are pleased to announce a mini-tour with the excellent band the audience aus Germany!

To celebrate these joyful news, here´s a completely inappropriate picture of Svein and Hans Martin. 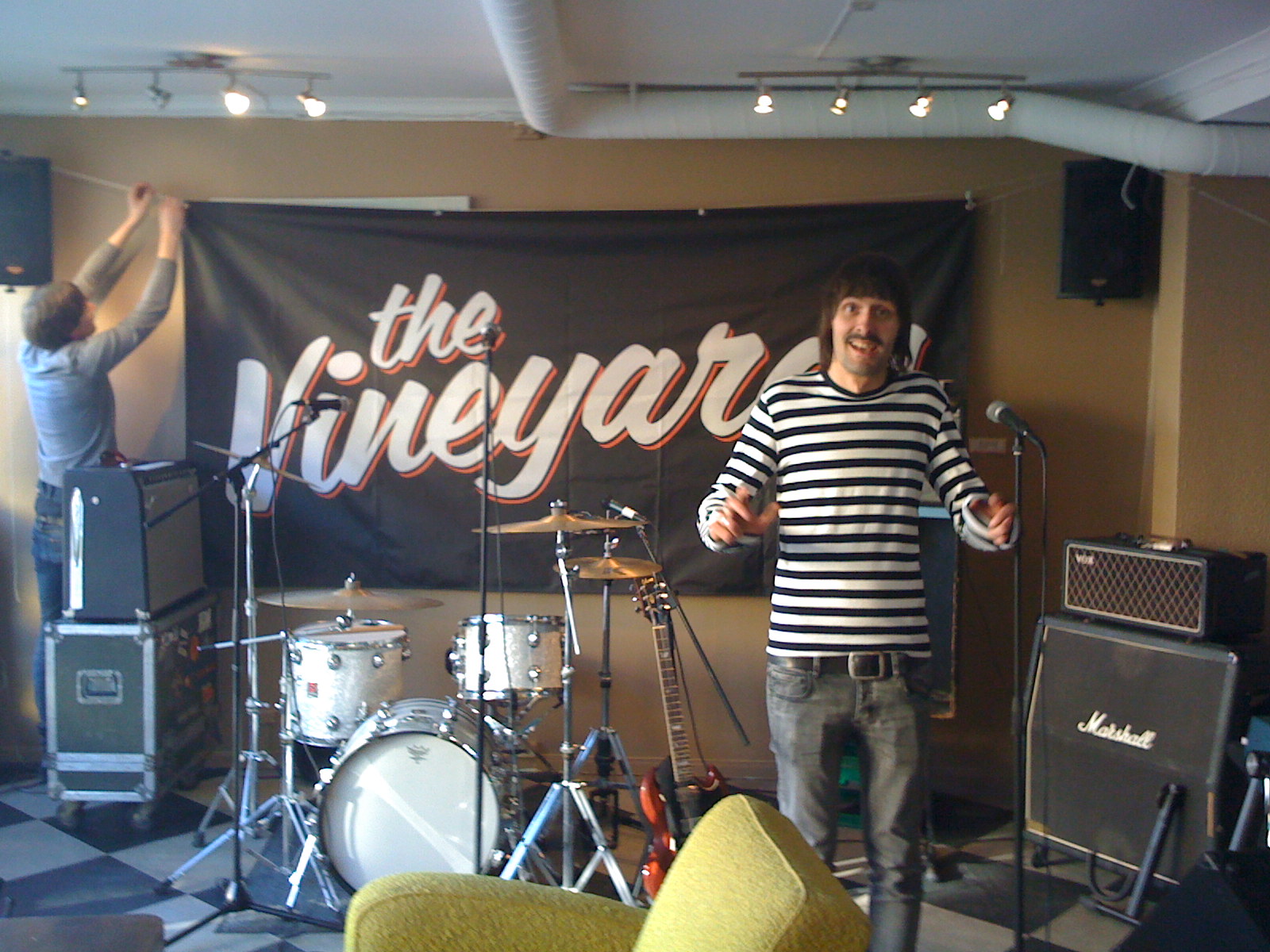 As of today The Vineyards’ new record, The Vineyards, is out in all possible formats we can think of, and here is where to go shopping for it. We do not have a complete list of record stores that carry our genious stuff (especially outside the lovely country of Norway), so if you have any info on other places to go shopping for our premium product please give us a note in the comments below and we’ll update the list as we go.

As always you can always pop by for some free streaming at MySpace.com/thevineyards

Last night I was walking down the street Howie B from Bloodlights drove by in his car shouting through the window: «great vinyl»!!

And today I ran down to the superb record store Big Dipper to see for myself, and there it was! So, finally the long awaited time is here.

And you better run and get a copy for yourself and all your friends. Just take a look at the back: Track 13? Oh, yes, there is a bonus track. The first recording ever made by The Vineyards from 2003.