With just a couple of days left to the release of our new album we thought you might wanted to get a little trivia on the album. How did we do it, who did we work with and what will you hear? Well, here’s the story.

I all started way back in 2007. The Vineyards was rolling high on their recent success with the album Hoggin’ All the Action (spotify-link), and the EP Good Rock for Good People. They had toured the nation and started working to make their way into Europe. About that time, word came down from the record company, Rec90, that they wanted to release yet another album with The Vineyards. This was of course great news for the band, but none the less they expected it and found it quite natural seeing the success they had with listing on national radio and on MTV. They started working on new material, tried experimenting with a new sound, a unique sound that would manifest their hold on the audience. They were all positive, happy and quite satisfied with they way the world smiled at them. And they stayd that way for quite a while.

Full of energy, they launched their very first tour in Germany, set up by a rouge promotor they met at an outdoor concert in the hot and sunny summer in Oslo. The tour became a major success and The Vineyards were on top of the world. They were not just the kings of the Norwegian rock n’ roll scene, but they now had quite a following in Germany as well. Here’s how the band presented themselves Germany:

Then it was Christmas 2007, and time had come for the first ever The Vineyard baby to be born. The little man was created by Tormod (drummer) and his girlfriend. The Vineyards cheered in happines to witness the wonders of life. How could life be better than this? They celebrated the event with putting on a wild show, and it looked like this:

Then came 2008, the year that was supposed to be written in the vineyardian chronicles as the defining year in history for the band. Few, if any, saw anything that would stop them on their way to fame and glory. The recording of their second album was planned in the beginning of the year and the material was written well in advance when it struck them as a nuclear bomb on a sunny day – their contact at the record company had quit a few months in advance and had never said a word to the promising rock act that everybody was waiting for. It turned out that not a single thing really was planned at all! The frustration they felt led them into total depression and bewilderment that will stand unprecedented for quite some time. The record was obviously delayed as they had no studio to go to and no reliable contact at the record company. What were they to do? And so, almost 6 months went by with som scattered gigs at home and abroad when lightning struck, or should we say it was more of an epiphany – How about recording an album on their own?

Here’s some pictures from these important months:
[nggallery id=5]

And as luck will have it, they were booked to the fine German festival Rocken am Brocken. Backstage, getting wasted (as always), they caught a glimps of a familiar face. They could, however, not recognize him at first glance, but there was definetly something familiar wih the guy. After a short, but heavy argument, they decided that the oldest and wisest among them should go over and say hi and find out who the hell this guy was. As the old one is so wise, it did not take long to befriend the mysterious but friendly guy at the other end of the backstage area. And who else could it be, but the ledgendary Claus Grabke! Not only did the old and wise member of The Vineyards befriend Claus Grabke, he brokered a deal with the guy. He was the right man to mix the new album! The Vineyards was yet again on top of the situation!

They gathered their friends and started buiding up a studio in an abandoned wearhouse on the docks of Oslo. They got a hold of the finest gear available and by November 2008 the studio was finished and the recording session began. Here’s a clip from the recording session:

With the recording on the way, and the money flowing in from the record company, The Vineyards realized they had forgotten one of the essential factors in making a new album. They had forgotten the graphic profile! Now, every album that The Vineyards likes has a very distinct graphic profile and design. The Vineyards is, as many other bands, extremly cautions on how they are represented in the media and how their recordings are packaged. So, close to December 2008, they decided to send the singer out on a quest to find the one person they believed could manage to work under the strict conditions thay had set: the rising star Synne Moen Tøften. She was not easy to get a hold of, but as she was approached by the singer (and you can’t just ignore this singer!) she could not say no. In just a few seconds she had come up with an entire graphical profile for the band and the work started! She got a hold of the fine photographer Mariell Amélie and you can see some of the pictures on Flickr. 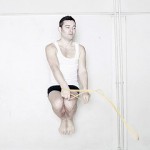 Then came 2009. The recordings were done. Now it was time for some serious mixing. The master tapes were securely shipped to a seclude and somewhat rural village in Germany. The receiver was the above mentioned Mr. Claus Grabke. After some initial calibration via heavy use of of phone and e-mail, the band had agreed on how the sound should be – and as it turned out both band and Grabke were fully on the same frequency!

In mid February the mixing was done, and the album was sent to mastering at Strype Audio. It was Audun Strype himself that did the job, and with the same high quality as with Good Rock for Good People. Then of to pressing. And not just CDs. Some fine men in the Czech Republic are even conducting the fine art of vinyl pressing!

The Vineyards had once again prevailed and as a courtesy to the public they placed the release concert to one of Oslo’s finest music clubs – Café Mono. On March 31st they will shoe the world, once again, who definetly rules the rock n’ roll scene.

We wish them all the best on their way to the stars!